April 7, 2015
Ever noticed—maybe even marveled—at some of the classic old stone and log buildings and shelters you’ve seen at many Washington state parks? Most likely they were built back in the 1930s by the Civilian Conservation Corps (CCC). The CCC was one of many Depression-era work-relief programs that provided jobs to millions of out-of-work single young men. Another program, the Works Progress Administration (WPA) focused on work opportunities for older unemployed men, many with families. In early April, we celebrate the CCC’s 82nd anniversary and the WPA’s 80th anniversary—both created during President Franklin D. Roosevelt’s New Deal era. Nearly one-fifth of Washington’s 124 state parks benefited from the sweat and toil of the men and boys from the CCC and WPA. Today, throughout many of these state parks, you can still see the legacy of their hard work in buildings, trails, roads and bridges. Looking to combine a love of history with a visit to a state park? Check out one or all of the following parks with intact examples of work from the CCC and WPA era.

Where: Oak Harbor, Island County
Before, during and after the Deception and Canoe passes bridges were built, the CCC ran a camp on each side of the pass. You can find examples of CCC workmanship throughout the 4,000-acre Deception Pass State Park. Look for the stone and log picnic and kitchen shelters, restrooms and other buildings. The CCC also built many of roads and trails in the park. Much of the park’s buildings still function as originally built, but some have been repurposed. Have you ever visited the CCC Interpretive Center at Bowman Bay? Originally built as a bathhouse, the center now serves as a museum where you can discover more about the CCC’s influence in Washington state parks. The restroom built at Rosario Beach is now a field classroom. You can also see CCC evidence on the other side of Canoe and Deception passes at the Cornet Bay Retreat Center, which was once the site of one of the two CCC camps. Deception Pass has one of the greatest concentrations of CCC buildings, trails and roadwork of any Washington state park. Little did the hard-working men of the CCC realize they’d be building what would become one of Washington’s most visited parks! Deception Pass State Park is listed on the Washington Heritage Register. 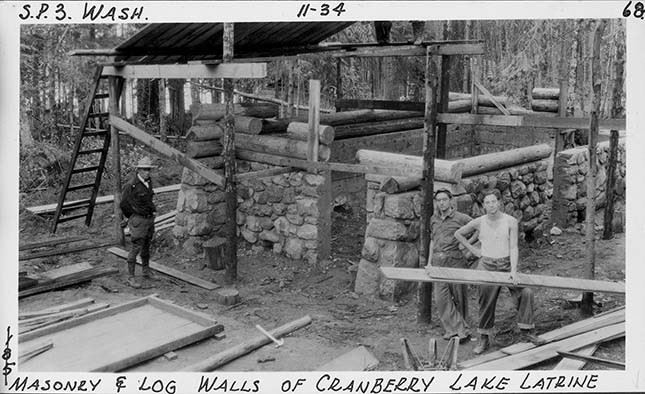 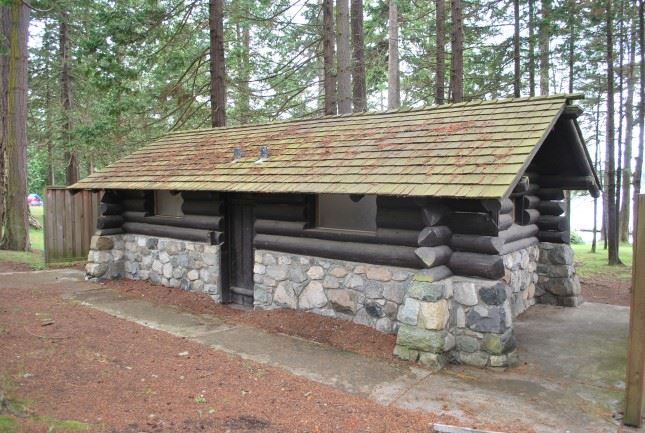 Where: Orcas Island, San Juan County Hike, bike or drive to the top of 2,400-foot Mount Constitution and your reward is a commanding view of the San Juan Islands and the southern Canadian Gulf Islands. But wait… there’s more! Perched atop Mount Constitution is perhaps the most iconic of all CCC-built structures in Washington’s state parks: the observation tower. Built over a two-year period as a fire lookout, the 45-foot stone tower offers even more jaw-dropping panoramic views. Learn more about the park and CCC history in the lower floor’s museum. For more CCC evidence at Moran State Park, check out the Mountain Lake and the Cold Springs areas and the bathhouse and picnic shelters at the day-use area adjacent to Cascade Lake. The former caretaker’s complex is now the park office. Moran State Park is listed on the National Register of Historic Places. 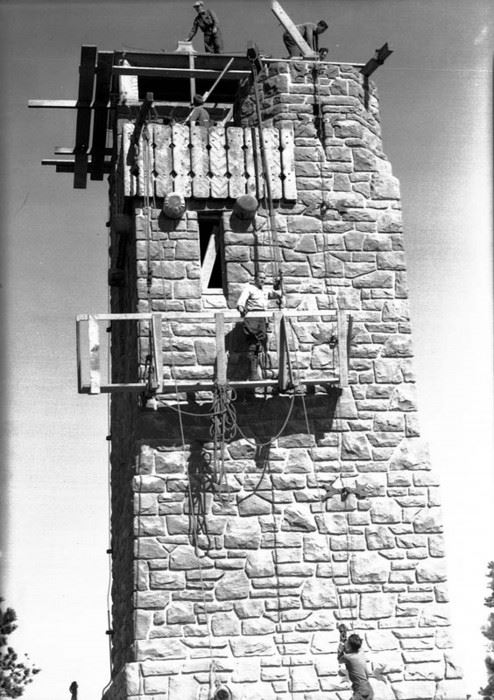 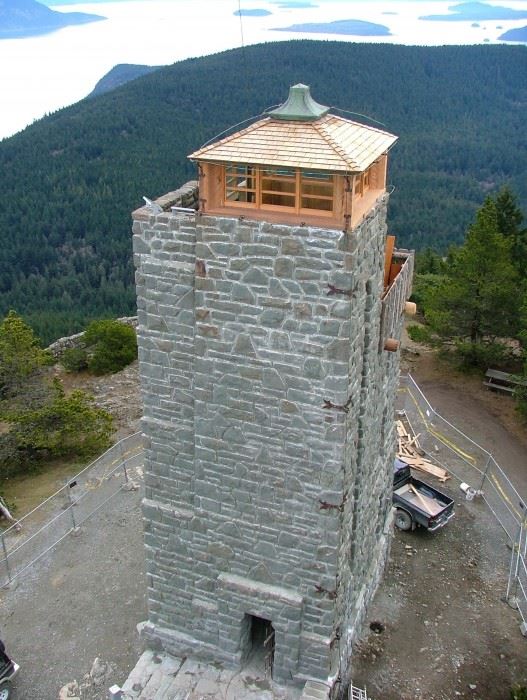 Where: Union, Mason County
Look for examples of work from both CCC and WPA programs at Twanoh State Park. How do you tell the difference? The CCC used mostly local materials—such as stone and logs. The WPA crews generally used building materials from other areas. Notice the brick bathhouse…here’s a good example of a WPA project. Compare the bathhouse architecture to the stone day-use kitchen shelter—the signature CCC building in the park.
Twanoh State Park is listed on the National Register of Historic Places. 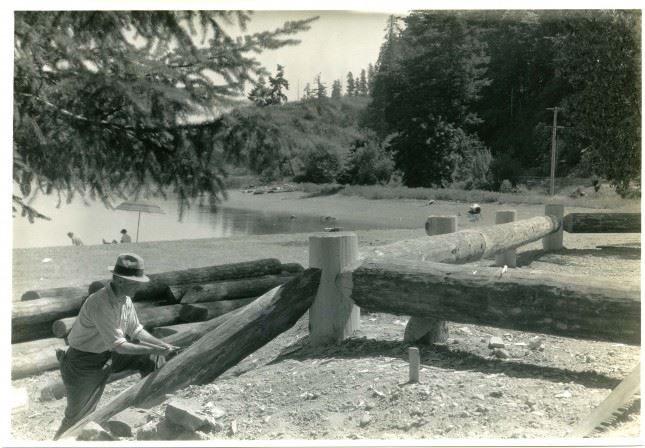 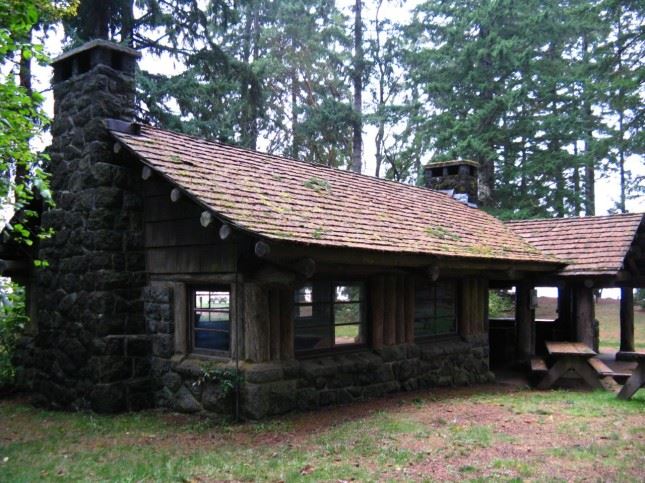 Where: Skamania, Skamania County
You think the hike up Beacon Rock is tough? Imagine CCC crews toiling under the hot sun with pick axes and shovels to improve the trail! When you reach the top, catch your breath and take in the view of the Columbia River. Say a silent “thank you” to the CCC ‘boys’ for improving the trail from the early days when Henry Biddle acquired the property to save it from becoming a quarry! Down at the campground, check out the extensive stonework in some of the buildings, such as the former caretaker’s house and garage. While many CCC buildings in state parks are a combination of stone and log, some of the Beacon Rock State Park buildings were built almost entirely of stone. 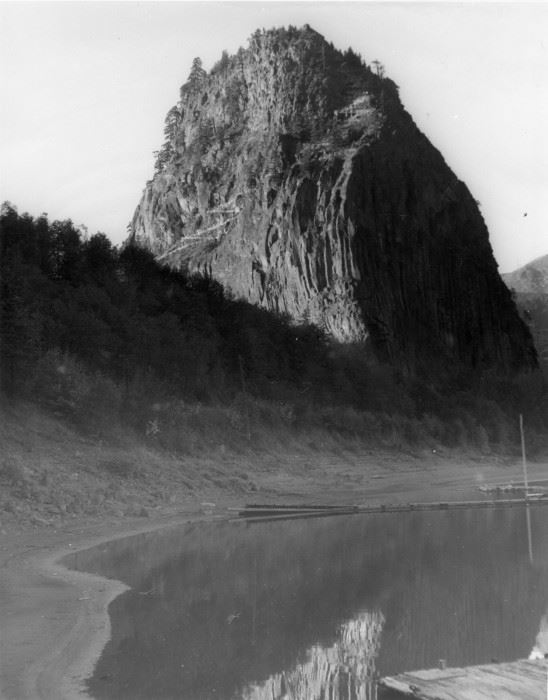 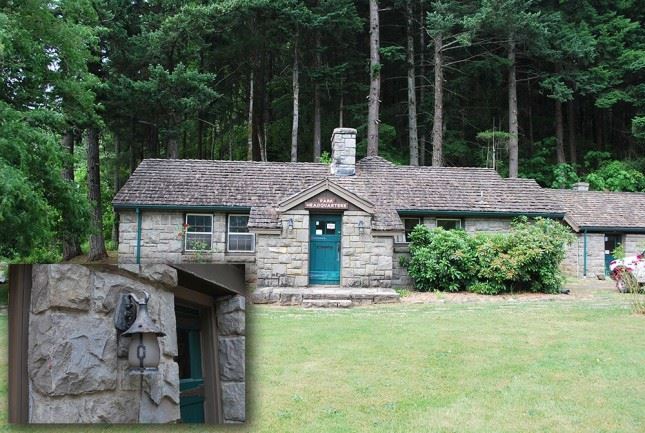 Where: Spokane, Spokane County
How about a stroll across a swinging footbridge? This is the signature CCC project at Riverside State Park, suspended above the Spokane River in the Bowl & Pitcher area. The bridge is one-of-a-kind within Washington’s state parks. A similar bridge, built by the CCC at Rainbow Falls State Park near Chehalis, washed out during the floods of 2007.
You can find more CCC work throughout Riverside, including the stone comfort station and the large kitchen shelter.
Riverside State Park also housed CCC crews who did extensive road work, both within the park and also on the upper road to the summit of Mount Spokane during the summer months. WPA crews built the lower section of the Mount Spokane Summit Road. 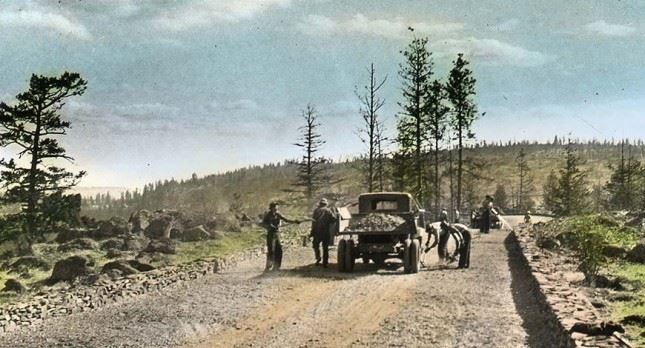 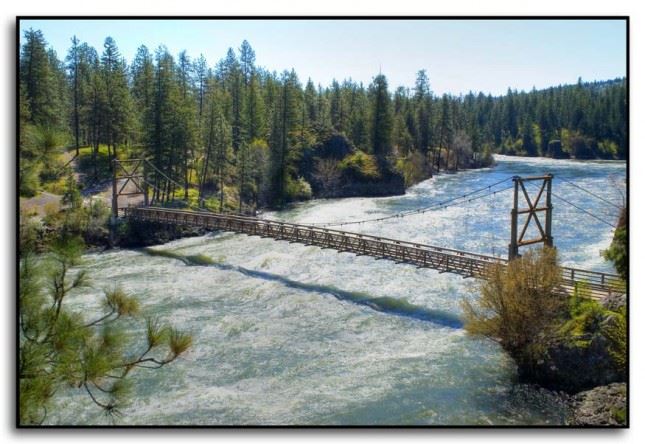 
Where: Pasco, Franklin County
If you love Art-Deco design, you must visit the interpretive center at Sacajawea State Park! The park sits on a point of land where the Columbia and Snake rivers join forces. The interpretive center building is by far the best example of WPA influence in state parks. Also known as “PWA Moderne,” the design reflects a trend popular with relief agency projects during the Depression. Be sure to take a moment to notice the lush landscaping. WPA crews planted and seeded this area back in the ’30s.
Sacajawea State Park is listed on the National Register of Historic Places. 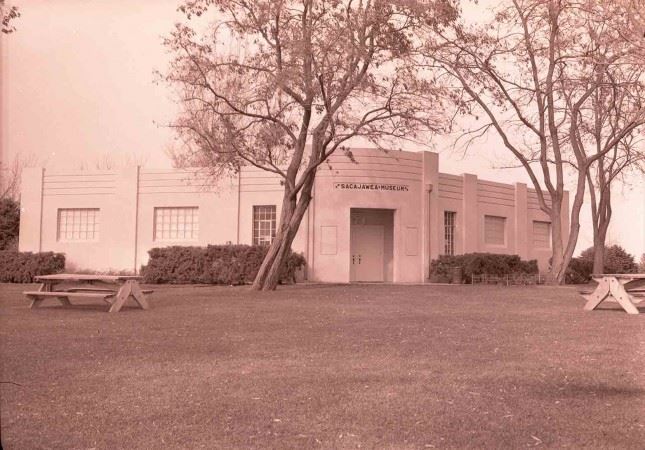 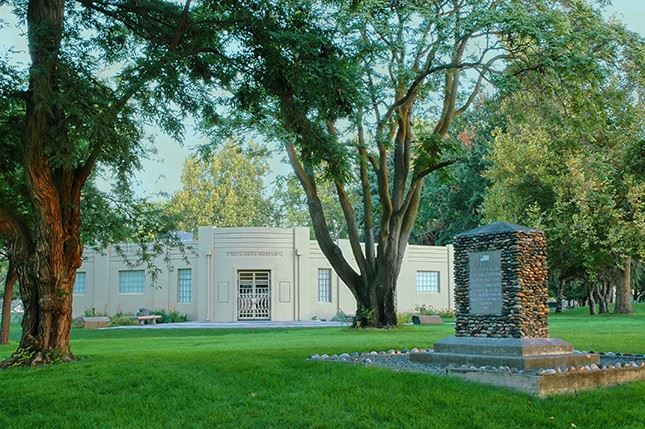 The CCC and/or WPA history reaches into other state parks. Unfortunately, time has taken its toll on the evidence at many of these parks. Fortunately, future plans call for renovating some of these parks, depending on the availability of funds.
CCC camps: WPA projects:

It wasn’t all sweat and toil…

CCC camps also had their social time! Below, the CCC Orchestra from Camp Millersylvania near Olympia. 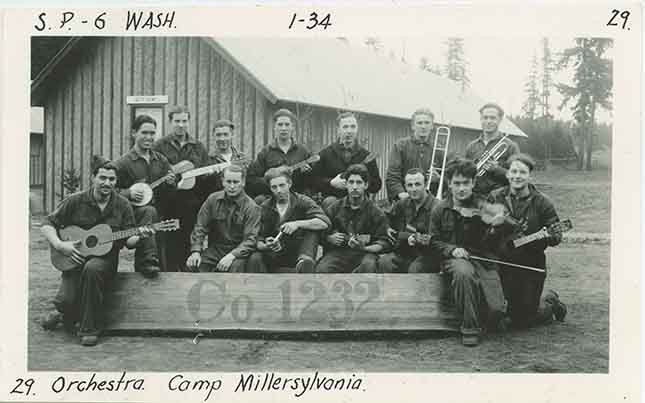 “The Best Time of My Life: Stories of the Civilian Conservation Corps”

Further reading:
“The Park Builders: A History of State Parks in the Pacific Northwest” by Thomas R. Cox.
“Two Hands and a Shovel: An illustrated exploration of the work of the Civilian Conservation Corps at Deception Pass State Park.” Editors: Jack Hartt and Sam Wotipka (Available through Amazon.com)

Have a favorite state park from the CCC or WPA era?
We’d love to hear about it…and see pictures! Share your story here.

Check out some footage from the CCC days,

including interviews with men who worked on projects.
Follow Us: