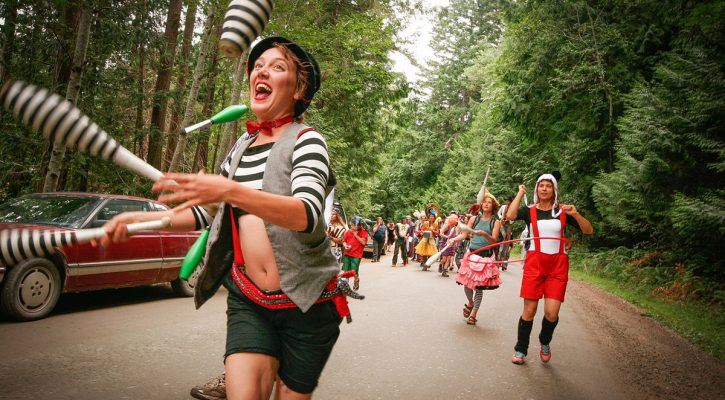 Looking for:
Fun the whole family can enjoy?
That blends education and entertainment?
In a beautiful setting?
For free? 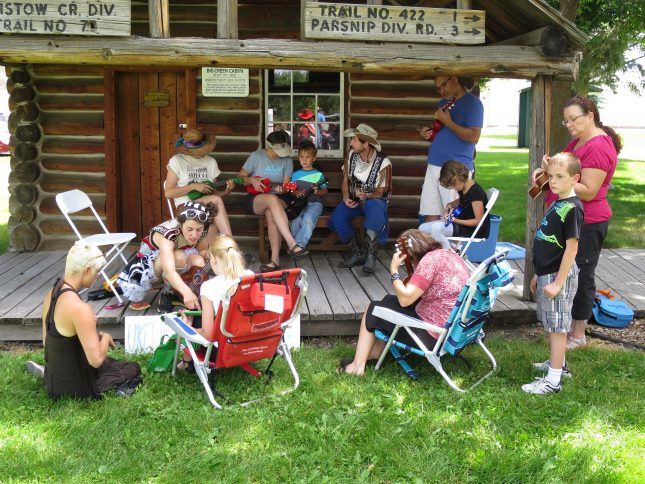 Don’t just see the entertainment–BE the entertainment! At a Chautauqua there’s lots to learn at workshops, like this one for ukulele.
This summer the New Old Time Chautauqua (say cha-TAWK-wah) is bringing its unique blend of education and entertainment to Washington State Parks and neighboring communities.  The NOTC 2016 six-stop tour spans the state. Find one near you and mark your calendar for an unforgettable and all-American experience! 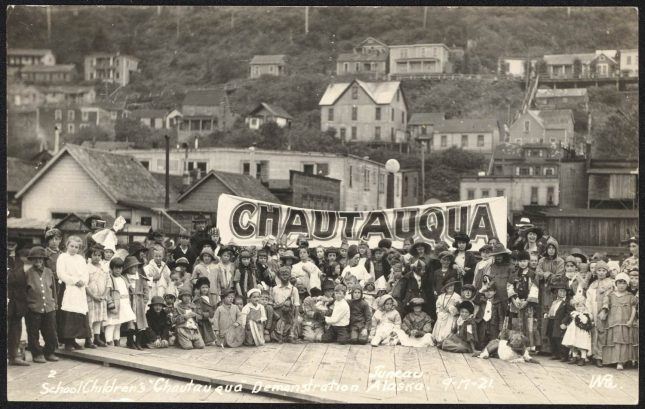 In their heyday, Chautauquas drew thousands of visitors to their unique blend of education and entertainment.
So just what is a Chautauqua? Think of it as a roving beehive of American culture that evolves at every stop. From the moment you arrive you’ll be immersed a panoramic mish-mash of arts, carnivalesque performances, sciences, education, practical skills demonstrations and even laundry tips the NOTC website describes as “the predecessor of today’s NPR (and) TED talks.”

The Chautauqua tradition was born more than 140 years ago on the idyllic shore of Chautauqua Lake (hence the name) in upstate New York. Held in large, brown tents and often in a beautiful, natural setting, the Chautauqua movement was a cultural sensation.

By 1924 it blossomed into 1,000 circuits traveling to 10,000 towns and drawing 40,000,000 spectators.  When a Chautauqua rolled in for a week, people flocked to see everything from dances to Shakespeare to lectures by such famed figures as Susan B. Anthony and Mark Twain. The Chautauqua tradition faded in the 1930s as radio and television grew in popularity.

Today the tradition continues with the New Old Time Chautauqua. It was founded in 1981 by health care practitioners, educators and performers including Dr. Patch Adams and the Flying Karamozov Brothers. The NOTC tours revive the Chautauqua spirit, and bring live entertainment and educational workshops to rural communities. This year, they are collaborating with Washington State Parks and their nearby communities.

“The idea of the Chautauqua-Parks partnership is to renew ties and to foster goodwill between the towns and their local state parks,” said Paul Magid, founding member of the NOTC and The Flying Karamazov Brothers.

Want an idea of what a Chautauqua is like? Check out this video of the NOTC’s 2015 tour of Southeast Alaska.

When:  July 16—workshops 4 to 6 p.m., potluck 6 to 8 p.m.
Where: Off State Route 129, near Anatone
The skinny: The Washington leg of the 2016 NOTC tour opens at beautiful Fields Spring in Eastern Washington. Enjoy an afternoon of free workshops featuring topics ranging from botany and biology to kids crafts to theater arts. Hike to the top of Puffer Butte and take in the sweeping views of Hells Canyon, the Wallowa Mountains and the Grand Ronde River, then head down and dig in at the community potluck. Bring a dish and enjoy the music provided by the NOTC’s 25-piece band! 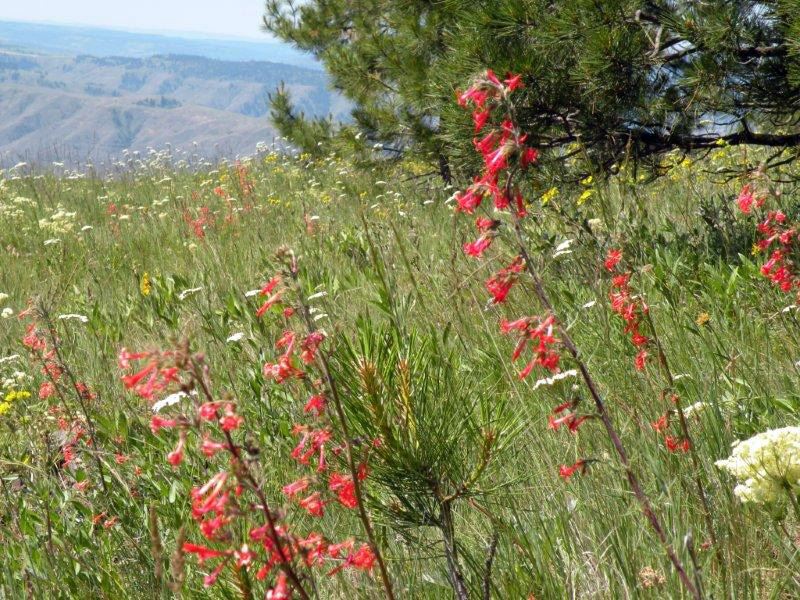 The hills are alive, with the sound of music. And juggling. And old-time fun! Fields Spring is the first stop on the NOTC’s tour of Washington State Parks.

When:  July 18—workshops 4 to 6 p.m.; potluck 6 to 8 p.m, at Lewis & Clark Trail. July 19—parade at noon, ending in Pietrzycki City Park, workshops are from 12:30 to 3:30 p.m. Where: Off U.S. Highway 12 between Dayton and Waitsburg and in Dayton at Pietrzycki City Park and in the Dayton High School gym. The skinny: The Chautauqua tradition returns to Dayton area for the first time in nearly a century! “In its heyday, the importance of Chautauqua week in Dayton’s yearly cycle was right up there with Christmas, Easter and the Fourth of July,” says the NOTC website. Come experience that spirit again as the NOTC rolls into the cool, green oasis of cottonwood trees and Touchet River beauty that is Lewis & Clark Trail State Park. Stay for the fun as the NOTC drops in to the classic small-town Washington atmosphere of Dayton, beginning with a parade and a full afternoon of entertainment and workshops.

When:  July 25—workshops 4 to 6 p.m., potluck 6 to 8 p.m. at Bogachiel.
July 26—noon parade, workshops 12:30 p.m., show at 7 p.m. in Forks.
Where: Off U.S. Highway 101 on the Olympic Peninsula near Forks.
The skinny:  For its next act, the NOTC arrives in Western Washington with a stop in the Hoh Rainforest. Ferned and forested Bogachiel State Park on the Bogachiel River will provide a lush backdrop for the NOTC’s afternoon workshops and lend a classic Pacific Northwest camping feel to the evening potluck. Stick around for the fun the following day in popular Forks! 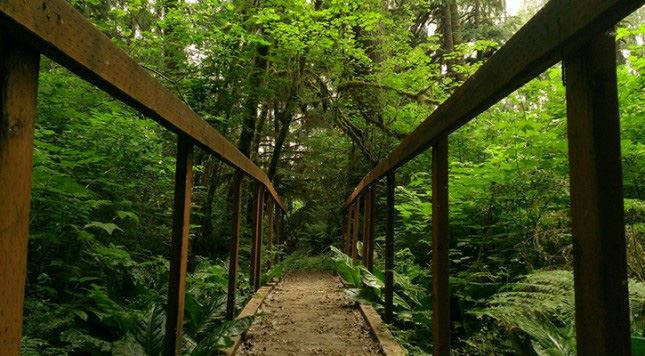 Fun in the rain forest. Join the NOTC as it stops at verdant Bogachiel State Park on the Olympic Peninsula.

When: July 29—workshops 4 to 6 p.m., potluck 6 to 8 p.m. at Larrabee
July 30—noon parade, workshops 12:30 p.m., show 7 p.m. in Mount Vernon
Where: Off Chuckanut Drive near Bellingham and in Mount Vernon
The skinny: Washington’s oldest state park plays host to an old-time tradition. Join the NOTC as it works it’s magic at Larrabee State Park on the majestic Samish Bay’s rocky shoreline. Enjoy the sweeping views of the San Juan Archipelago as you play and learn! The cultural circus continues the next day in historic Mount Vernon.

When: Aug. 5—workshops 4 to 6 p.m., potluck 6 to 8 p.m., at Curlew.
Aug. 6—noon parade, workshops 12:30 p.m., show 7 p.m.,  in Republic.
Where: Off State Route 21 near Republic and in Republic
The skinny: The tour concludes much as it began more than a century ago: on the shores of an idyllic lake. Lovely Curlew Lake and surrounding mountains set the stage for the NOTC’s final Washington performance. Enjoy the wide green lawns and even some swimming before you head to the afternoon workshops. You won’t want to miss the following day’s parade and show in Republic, with its historic buildings and mountain views! 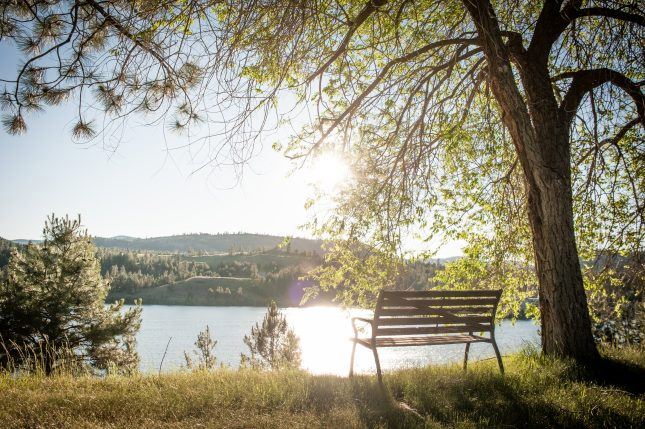 Are you going to the New Old Time Chautauqua?