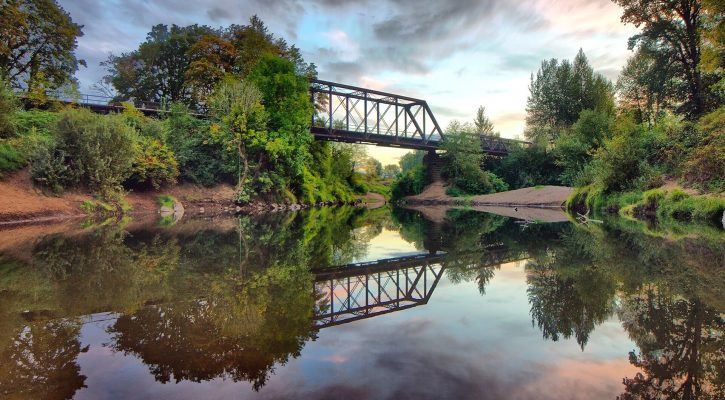 
There’s just something about a trail.

The moment your foot, or wheel or even your horse’s  hoof strikes the path, you feel free. Free to wander, free to breathe deep and think, free to let your body move and your mind drink in the beauty surrounding you. 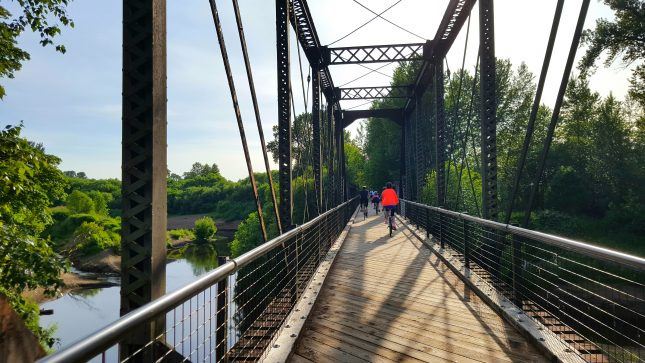 Feel your stress melting away! Unplug, unwind and log a few miles on the Willapa Hills State Park. Photo by Holli Schoonover
As soon as you embark on the trail from its eastern terminus at the Chehalis Trailhead, the scenery begins to change.   The roar of Interstate 5 fades, and the rush of the river provides theWillapa Hills Trail background music. The first five miles from Chehalis are paved, making the walking and riding easy. Cows low in the background. Eagles swoop. Frogs croak in the river shallows. Rabbits rustle in the high grass. Small towns and farms dot the landscape.

After a few minutes into your journey, west from the trailhead,  you’ll cross the first bridge. Narrow, sturdy and made of heavy, riveted steel, the bridge is fitted with new plank deck replacing the old rails and ties. Continue on, and bridge after bridge appear, crossing over the snaking Chehalis River.  These structures are great places to catch your breath and survey the wide open rural landscape.

About 5 miles west of Chehalis, the trail surface changes  to compacted gravel.  If you are biking the trail, it will be easier on a bike with tires made for off-road, such as a mountain or a fat tire bike, says Holli Schoonover, a marketing specialist who is helping to organize the Willapa Hills Fat Tire Ride & Festival, happening  at the trail June 25 and 26. 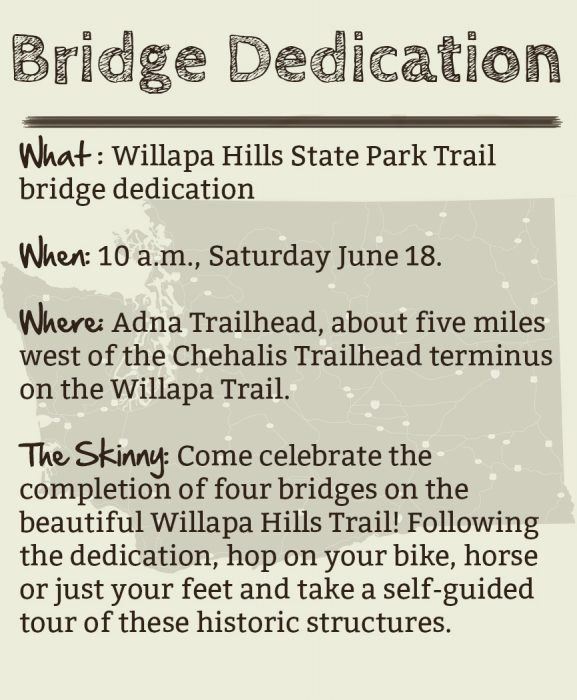 After you pass Mile Marker 15, start looking to your left (south) for the spur road that takes you to Rainbow Falls State Park. Ride or hike into the park, and enjoy a moment at the falls or even a night of camping among the old-growth trees!

Willapa began the way many modern recreation trails do—as a rail spur serving the vast Northern Pacific Railway line. Built in the late 1800s, it was the final hop of a 2,000-mile railroad carrying passengers, crops and lumber from Lake Superior to Willapa Bay and throughout the American West. This trail was a spur providing access to timber and mining areas in the Willapa Hills.

As the need for rail declined, so did this spur, which was finally abandoned in 1990. The Washington State Parks and Recreation Commission acquired the railroad right-of-way for use as a trail in 1993. A dream in progress ever since, the tracks have disappeared and the trail has steadily grown into a place of beauty and recreation anyone can enjoy. Careful! A tourist steam train ride still uses the tracks near the trail — you may even catch a glimpse of it puffing by!

The trail is a true community project, made possible by funding and support from public and private contributors including Washington State Parks, the Washington State Parks Foundation via a donation from the Boeing Company, Lewis County Community Trails, the Federal Emergency Management Agency (FEMA) for a bridge and trestle damaged in the 2007 flood, and the Washington Wildlife and Recreation Commission.

Great progress has been made, but the trail is far from complete. Washington State Parks embraces long-distance trails as an important aspect of its mission and has plans to complete the unimproved segments in Pacific County as funding becomes available. 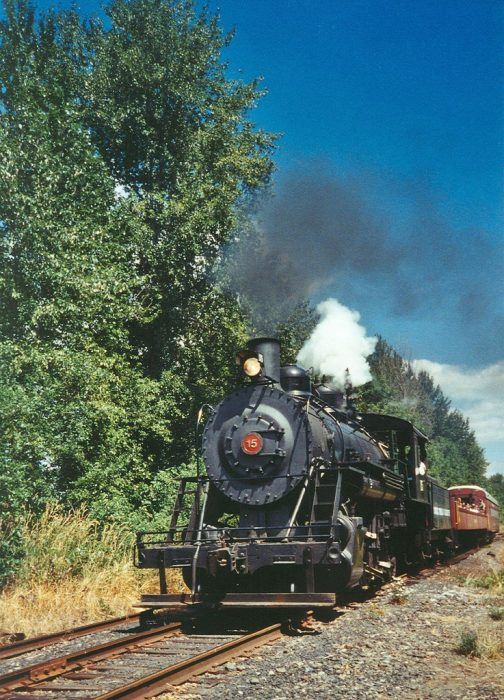 Steam logging trains once frequented the Willapa Hills State Park Trail when it was a rail spur. This one serves as a tourist attraction in Chehalis, near the trail. Photo by Oregon Ducatisti 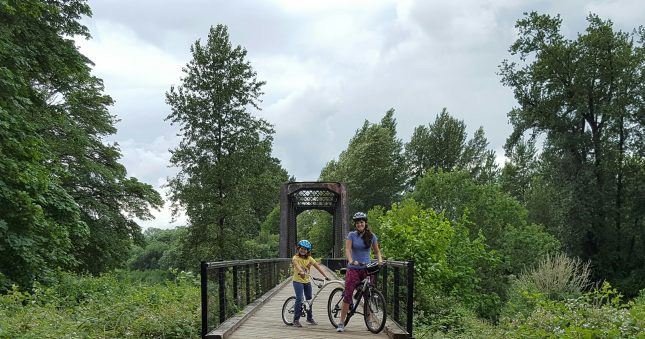 Trails are a family affair! Bond with your brood on a breath-taking trail ride. Photo by Holli Schoonover

Use caution: Sections of the Willapa Trail west of the Pacific County line (about Mile Marker 25) remain undeveloped.  Please observe all posted signage regarding trail conditions.

Know your trail etiquette: If you are not yet familiar with trail etiquette and trail yield etiquette on trails shared with hikers, bikers and equestrians, follow the links, and brush up before you head out!

Camping:
No camping is allowed on the Willapa Hills Trail. However, you may wish to pitch your tent (or RV) at Rainbow Falls State Park, which has ample camping.

Discover Pass:
If you park a vehicle at any of the Willapa Hills State Park trailheads you must display a Discover Pass.

Location:
Spanning 56 miles between the cities of Chehalis in Lewis County and South Bend in Pacific County.

Did you do the Willapa?
Share your trail tales and photos here!

Feature photo of Bridge #2 on the Willapa Hills Trail by Chris Brewer of Discover Lewis County
Follow Us: