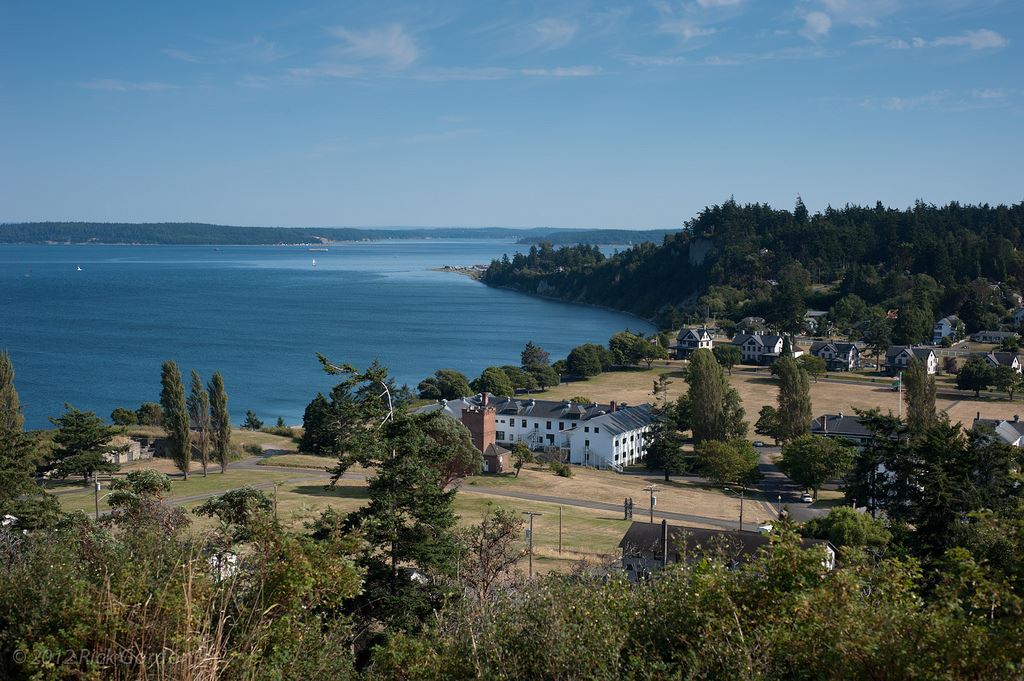 Want to know what turn-of-the-century military life was like in Washington? Come peek into the past at Fort Worden Historical State Park!

Looking for a fun and active way to honor America’s service women and men while you enjoy the Veterans Day holiday?

Your state parks are great places to do just that! From coastal batteries to battlegrounds, parks statewide offer opportunities for you to recreate as you reflect. Plus, Veteran’s Day is a state parks free day! You won’t need a Discover Pass for day use.

Many Washington parks were once a part of the U.S. Army Coast Artillery Corps.  At the turn of the 20th Century, these forts represented a national shift in American military might. Some were quickly outmoded when aerial warfare became the hallmark of World War I. But for a time, the forts represented the height of our technology as we expanded from a Civil War-weary nation to a global super power. 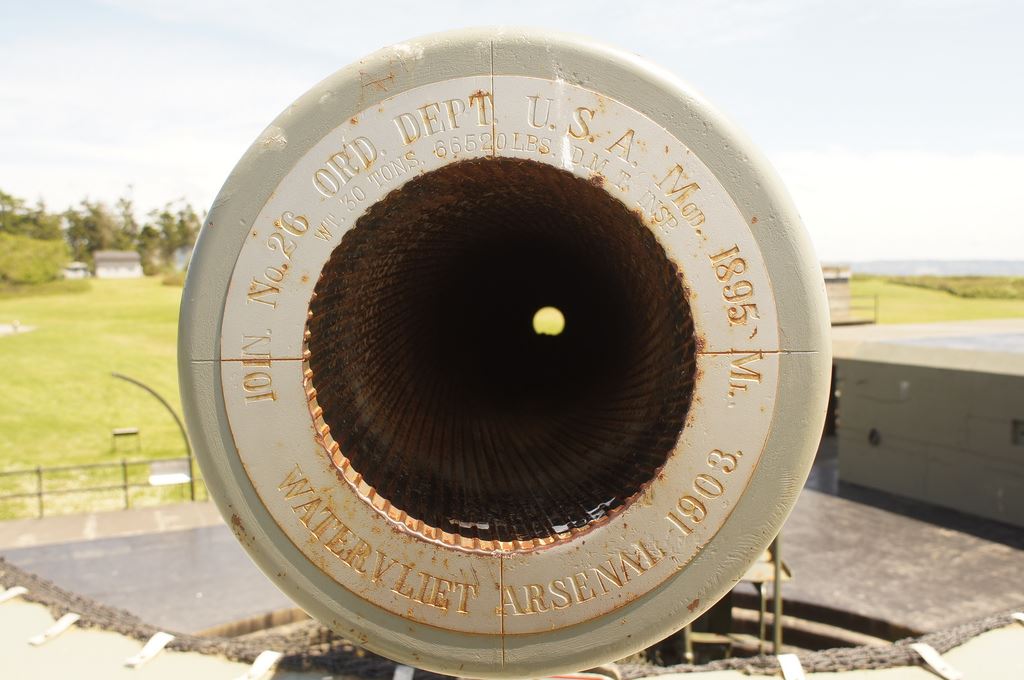 Now you see it... This enormous barrel belongs to a gun at Fort Casey that could "disappear!" After it was fired it could pull back out of sight and firing range from enemy ships.

Ready to be immersed in Washington’s rich military history? Get your boots shined, and let’s march!

During the Spanish-American War of 1898, Admiralty Inlet was considered so strategic to the security of the Puget Sound, Seattle and Bremerton Naval Ship Yard, three heavily armed Army coastal artillery forts were built to fortify the entrance.

Today, these forts serve as state parks. They are great places to play, stay, explore military history and enjoy the beauty of Washington’s north Puget Sound as you reflect on those who served to protect it.

Named in honor of Brigadier General Thomas Lincoln Casey, this park is a former Army fort and site of Admiralty Head Lighthouse. Built between 1897 and 1901 on Whidbey Island near Coupeville, Fort Casey was equipped with formidable disappearing guns. These guns were equipped with heavy hinged arms that were strategically raised and lowered to be hidden from fire during reloading.

Explore the circular pits where these weapons were housed, and then head over to the turn-of-the-century lighthouse. For a time, Admiralty Head Lighthouse not only protected incoming ships from disaster but also served as a military dog-training center.

Fort Casey’s parade grounds are an easy stroll. Walk around the path along the top edge of the batteries. At certain times of the year, you may even spot orca and other sea mammals swimming in Admiralty Inlet! Then, circle back down to peek into stark bunkers that once housed munitions. Move from bunker to bunker to find a number of interpretive signs and photo opportunities.

Fun fact: Note how the cement at the top of the circular pits is formed. The triangular berms and sloping edges were to help deflect munitions in the event of a conflict.

Near Fort Casey is another coastal defense site:  Fort Ebey was built during the height of World War II. Explore the batteries that once housed two six-inch guns and enjoy a picnic at this peaceful park. Nineteen trails—with cool names like “Hokey-Ka-Dodo” and “Kyle’s Kettle” — meander through the park. Camping here is closed for the season, but this is a great park for bird watching at any time of year. In good weather, you may even spot paragliders soaring above the beach.

At the north end of Marrowstone Island near Nordland, Fort Flagler was an active part of our nation’s defense in 1899. Named for Civil War Veteran Daniel W. Flagler, this fort is the smaller and more off-the-beaten path of the three forts.

The fort was used primarily for training. Go for a leisurely self-guided tour through the park’s extensive collection of batteries. Stay at the Victorian-era Non-Commissioned Officers’ Quarters for the weekend, and visit the museum and gift shop. Or rent the Engineer’s House overlooking the old Army parade grounds. 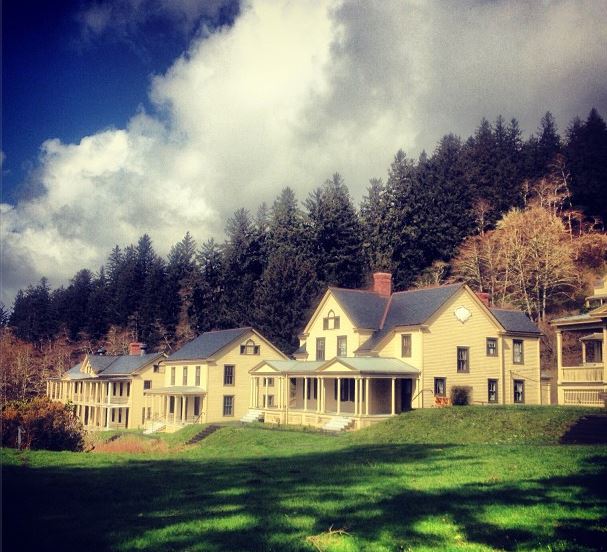 Stroll through history on a visit to Fort Columbia Historical State Park.

Built on the ancestral home of the Chinook Nation to guard the mouth of the Columbia River, Fort Columbia is a time capsule. Dive into America’s past at this stately fort near Chinook, which operated through three great wars. Take a walk through 5 miles of hiking trails, and checkout the dozen historic buildings.

Really want to immerse yourself in history? Rent and stay the night in the Steward’s or Scarborough Houses. The park offers a self-guided interpretive historic walk with information on various fort features and site history. Interpretive panels near the gun batteries include historic photos and blueprints. Visit the park museum for an in-depth look back at the history of the land, its people and the fort.

Only a few buildings are left of what was once Fort Middle Point near Port Orchard. Manchester is now a peaceful day-use park, with wide green lawns and excellent views of Rich Passage.

At the turn of the century, Manchester was the operations center for underwater mines (known as torpedoes) used to protect the Bremerton Naval Station. The ornate brick torpedo warehouse once housed the mines. It later became an officers’ club when weapons operations were moved to the smaller concrete structure at the park. Today it is a great place to take shelter from the rain, have a picnic or even get married!

The park also features a battery that was built but never used after Fort Ward on Bainbridge Island was declared sufficient to guard the passage.

Washington State Parks would like to extend heartfelt thanks to the men and women in all branches of our military. We thank you and your families for your service and for the richness you bring to our state and country by your hard work and sacrifice. Happy Veterans Day. We salute you!

Want to learn more about these parks and the National Coast Defense System?

Do you know anyone who served at one of Washington’s coastal defense forts?

We’d love to hear about it and see your photos! Share your story and pictures here!